A Glimpse At The Past - Episode 3
by Malcolm J. Croan 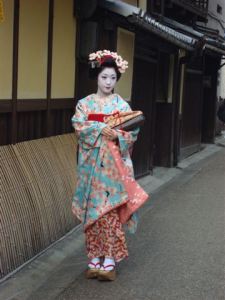 For this enlightening snippet I return to the ‘M. V. Border Shepherd,’ and Kobe Japan.  You may remember that in my previous soliloquy I explained how during my six on, six off shifts, I was responsible for discharging cargo.  Well it was during one such shift (twelve midnight until six am) that the following ill-fated incident conspired.

The third engineer, who happened to be a Kiwi, and because he was the only representative from that archipelago on board, was perhaps not surprisingly called Kiwi.  He was a small, early middle aged, friendly looking man with a pacifying penchant for his brier pipe, which could rarely be seen anywhere but suspended from the corner of his mouth.  So much so that the lower corner of his mouth sagged engagingly from the perpetual strain.

It must have been around two am; unable to sleep, Kiwi had joined me just off the main deck while I was partaking of my first smoke of the shift.  Deep in conversation, probably about Harpic’s lustful love affair; startled we simultaneously looked towards the door of the cabin.  An apparition, the most beautiful creature I had ever set my eyes on in my entire life.  Stunned, we both looked back at each other in disbelief, and then back at this vision of loveliness.  Even today my breath labours as I recall that first glimpse; small of figure, but perfectly formed, and those wide crescent-moon eyes, pools of youthful virtuousness.  Only she was not virtuous, she was there to ply her trade, but she should not have been there.  Strictly speaking it was my responsibility to escort her off of the ship.  Again Kiwi and I looked questioningly at each other, a suggestive bead of saliva escaping his drooping lower lip.  He was almost daring me to exercise my authority, for although he was a third engineer, and I a mere cadet; I had control of the deck.  But how could I, for at that moment I think I was coming down with Harpic syndrome.

Not a word of English did she, nor could she utter, but the message was clear.  We would have to barter for her favours.  One thousand yen, (£1.00) was the first bid from the salivating Kiwi, even his pipe seemed to have perked up?  How far will he go, I thought as I entered the bidding at two thousand yen.  The object of our rivalry glanced back at Kiwi, who quickly countered with three thousand yen.  Even in nineteen sixty-five a third engineer must have been on at least four hundred pounds a month, whereas I a poor cadet was allotted a meagre thirty-two.  Four thousand, I retorted, beads of sweat betraying my veracity.  Five thousand, drooled Kiwi.  My mind quickly totalled my indebtedness to the ship’s bonded stores, and reluctantly I conceded defeat.

Kiwi’s cabin was situated not thirty feet from my deck-watch cabin.  Now for those of you that may not be familiar with ship design.  In the bottom of each cabin door there is a mesh flood panel.  I may not have won the contest, but I was going to bear witness to its endeavours, and it was from here I secretly viewed the lascivious display. No I will not go into a blow-by-blow account of the proceedings.  Suffice to say that they did not make it to the bunk.  Coming from down under, it may be that perhaps Kiwi preferred the backward approach?  But one thing I can tell you is that the pipe never left his mouth.

Nine to ninety days they used to say, depending on the affliction.  And in Kiwi’s case nine days was about right.  Yes, you’ve guessed it a dose?  No it hurts me just to say the word, but it rhymes with:  Gondolier?  Not exactly a life threatening condition, but what you must remember that on board a merchant ship, there is no doctor, and not even the purser is qualified to administer injections.  Sure a course of penicillin tablets will cure the malady, but first, (turn away now you of a faint heart) the mucus must be expelled.  First a miniature cocktail stick like umbrella is inserted as far as achievable in the eye of the afflicted appendage.  Then extended and withdrawn, this may have to be repeated several times, need I go on?  Not that I was witness to this procedure, but I figured his pipe would have been a handy implement to grind his teeth on.  As for me, as my title suggests, I did dodge a fairly nasty bullet.

There is a moral to this story:  ‘There but for the grace of God go I,’ or ‘money can buy you everything.’
A Word from the Author

A Glimpse At The Past is as yet incomplete.  Who knows how far I may go with this look back in time.  I welcome any comment, hopefully favourable.  If any readers would like to read on, there are more episodes on my blog: http://callumc.wordpress.com.

Here are links to my published works Right Hand Up To God and Princess Sheeba.  If you send your email address to me at mjcroan@gmail.com, I'll send you a free PDF or Word copy of Right Hand Up To God.  But hurry, this offer lasts only until Christmas!